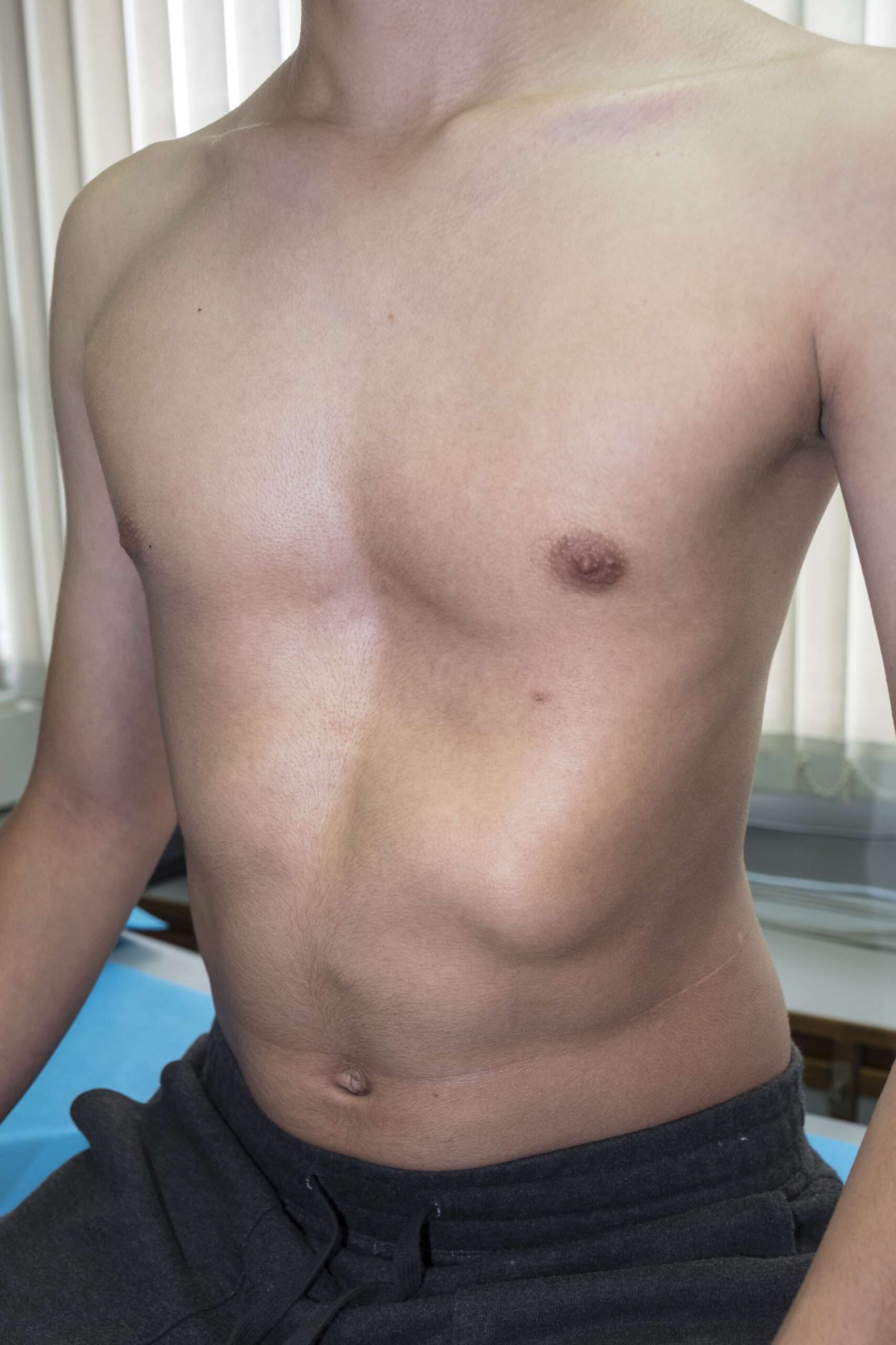 Pectus excavatum is a Latin term that means “hollowed chest.”

Pectus excavatum is a congenital condition due to too much growth of the cartilage that joins the ribs to the sternum causing the sternum to grow inward. As the cartilage pushes the sternum inward, the child’s chest appears to be sunken. The condition is also called “sunken chest” or “funnel chest.”

According to Boston Children’s Hospital, there is no known cause for pectus excavatum. Some studies investigating a genetic component are underway. Although the majority of cases don't involve a family history, there are many that do — enough to warrant suspicion that genes may play a significant role.

This condition can present in toddlers but typically becomes apparent during a growth spurt and puberty.

Pectus excavatum may be mild, moderate or severe. Even mild cases of pectus excavatum can make children feel self-conscious about their appearance. The way the chest looks may cause emotional stress for the child. If the condition is severe, the heart and lungs can be affected. The lower half of the breastbone may press on the heart and lungs. This can cause shortness of breath with exercise.

The psychological impact for teens and adults can be significant, especially regarding self-esteem and confidence. Symptoms can include:

How It Is Diagnosed & Treated

This condition is usually diagnosed during a physical examination and can be diagnosed via a visual examination of the anterior chest wall. Evaluation needs to be individually tailored to the patient's symptoms. It typically affects 4-5 ribs on each side of the sternum. The condition’s visibility varies from one case to the next, and there can sometimes be significant asymmetry between the two sides of the chest.

Pectus excavatum is also a common symptom of Marfan syndrome, and many children with spinal muscular atrophy (SMA) develop PE due to the diaphragmatic breathing that commonly accompanies that disease.

Diagnostic tests typically ordered are X-rays, MRI or CT scan of the chest. Other tests commonly ordered are:

In severe cases, repair of a pectus excavatum may help the function of the heart and lungs. But in most cases, the benefits are mostly psychological.

The Nuss or Ravitch procedures are surgical treatment options. The goal of pectus excavatum repair is to relieve pressure on the heart and lungs that may impair function. This typically leads to improvements in breathing, exercise intolerance and chest pain. It is not uncommon for patients with pectus excavatum to feel as if their breathing and stamina are normal before surgery and then realize they feel much improved following correction.

This minimally invasive procedure uses small incisions placed on each side of the chest. Long-handled tools and a narrow fiber-optic camera are inserted through the incisions. A curved metal bar is threaded under the depressed breastbone, to raise it into a more normal position. In some cases, more than one bar is used. The bars are removed after two or three years.

This older procedure involves a much larger incision down the center of the chest. The surgeon removes the deformed cartilage attaching the ribs to the lower breastbone and then fixes the breastbone into a more normal position with surgical hardware, such as a metal strut or mesh supports. These supports are removed after 12 months.

When removal of hardware is required, code 20680 is reported:

The code for pectus excavatum falls under the ICD-10-CM category code Q67 for congenital musculoskeletal deformities of head, face, spine and chest.

The National Library of Medicine (NIH) has updated their Pectus Excavatum continuing education activity as recently as July 2022. Click Here to learn more and access additional references on this topic.

Register for the Auditing for Compliance online training program w/option to certify.

Burnout – A Threat to Our Health Care System?

Read More
Burnout – A Threat to Our Health Care System?